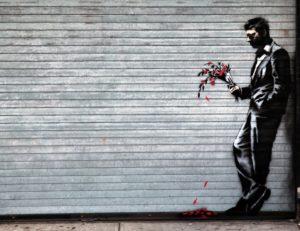 At one point in time, I didn’t believe in giving up on people.  Life is too short, and you never know when someone will be ripped from your reach. But…I think we all know there comes a time when giving up is acceptable.  Ok, so maybe YOU don’t all know, but I do. The last thing you want to do is end up in a whirlwind of regrets. “Maybe I should’ve, could’ve, and they would’ve…” We’ve all sung the “Shoulda, Coulda, Woulda” song a time or two (or twenty). With each passing chorus, you say, “I refuse to sing this song again”. Yet somehow, it ends up topping the charts. So when is it okay to give up on someone? I think it’s obvious. There is a tacit understanding, and a nagging at your soul to throw in the towel, wave the white flag, just PUT THE bullet in it! Any one person that requires so much effort probably isn’t worth it. “They” say: anything worth having is worth fighting for. Well I call bullshit, technical foul on that one. What’s the sense in fighting for someone that doesn’t even know and appreciate your worth?!!!! Why does it have to come down to the threat of you leaving, to make him want you? I know we all go through it, hoping he’ll have this epic epiphany; he’ll break out in a Tyrese tirade and beg you to “Stay”. No, sweetheart. Go. Quickly and swiftly.

When it comes to giving up, it can only be avoided for so long; like death, there’s no escaping it. You can’t save someone who doesn’t wanna be saved. If you have to coddle and prod him, there’s a lot of growing that needs to be done—on his part AND yours. When he’s looking at someone else the way you want him to look at you, it hurts right? To add insult to injury, he doesn’t even realize it hurts you. It’s not important enough for him to care. That’s when you know your battle is in vain.

Do all things in love.